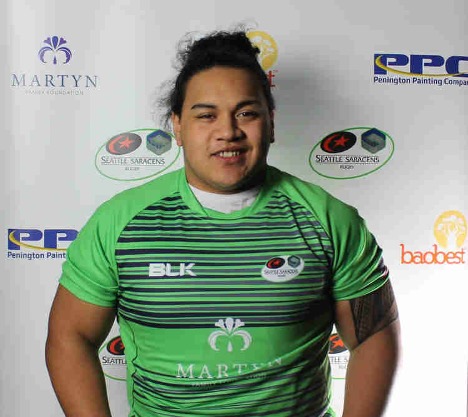 Club Vice President, Fraser Brumell, caught up with Dave before he went and asked him a few questions about his rugby background and contract in France.

Here's what Dave had to say;

"My first experience of rugby was being a water boy for my brothers team when he played for Budd Bay RFC. I didn’t start playing rugby until the next year when my brother and I transferred over and played for Prairie RFC in Yelm. During my second year I was selected to play for the Washington Loggers which led to playing for the HSAA U17 which traveled to France and Belgium. Because I was still 14 at the time, I was able to play for the first EIRA U16 team that played against BC rep side.

Following that, I attended USA Rugby’s Stars and Stripes game in Greeley, Colorado. Because of my age, I played 7s for EIRA (Eagle Impact Rugby Academy), in Las Vegas. That same year I was invited to attend the US Eagles camp prior to their match with the Maori All Blacks. I was then selected for the U19s All-American team that played Canada’s U19s at Chula Vista Elite Training center. I played for the HSAA, (High School All Americans), U18s team that participated in the Rugby Europe tournament, then ended my last tour back in BC playing for HSAA U18 against BC rep side.

Since I lived in Olympia and experienced only little parts of Seattle, the one thing I’m going to miss is driving to practice and looking at the Seattle skyline from the freeway. It was always a beautiful sight. What I won’t miss is the traffic getting into Seattle!

The biggest influences that have impacted my rugby career so far, from a teammates prospective, would be a lot of the Seattle Saracens guys who I have had the privilege to play with. Guys such as Psalm, Ollie, Shalom, Will Stowers etc... have all played a part of sculpting me into a better rugby player.

The one person who influenced my early rugby career up until now, would be my older brother Dylan. If it wasn’t for him pushing me to step out of my comfort zone to play rugby and always being there for me, I wouldn’t be here today.

My favorite Seattle Saracens moment would be the rookie show after our last game against UVIC. Shoutout to Psalm and Aladdin for the exquisite song choice!"