3 Wins From 3 Games on The Road at The Weekend! 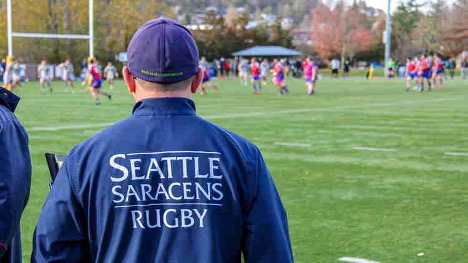 The Div. 1 game was an entertaining game with lots of excitement. The first half saw the Seattle team slightly ahead but Westshore and their left wing kept them in the game with 2 tries. A myriad of simple errors by Seattle also made it hard for the Saracens to get into a rhythm.

The game was hard fought by both sides and in the end the Saracens came out victors with a 29-22 win. Notable players for the Saracens squad were hooker, Halleluiah Edward Tiauli, and winger, Hironori Nakajima.

The Premier game started and although Seattle was missing some players due to injury, there were a couple of veteran players back from injury also. The first half saw some big collisions early in the game and the Seattle side played an expansive game, with Shalom Suniula at 10 and Mike Garrity at 12 connecting well and creating space to make several breaks. The Seattle lineouts functioned well and second row forwards, Taylor Krumrei and Nick McKenna did an excellent job securing good ball for the Seattle team.

With the second half underway the Seattle team quickly started to reach its stride and some good secure ball from the forwards. Slick hands by the Seattle backs contributed to 3 tries from Dion Crowder who worked hard to finish them off.

Westshore did not give up though and replied with 2 more tries of their own but the Seattle team held on with some strong defensive work to secure the victory 39-30.

It was a wonderful team effort, but some standout players were #9 Isaiah Chinen, #10 Shalom Suniula and Taylor Krumrei.

The weekend also saw the Seattle Saracens Women Premier team with a tremendous win of 52-12 over Capilano RFC.